Mobile Elevating Work Platforms are usually used for warehousing and construction sites, but did you know there are other uses for MEWP such as moving. Learn more.

While most boom lifts, telehandlers and scissor lifts spend their life in a warehouse or on a construction site, you’ll find some MEWPs in some interesting places.

What are the top 7 surprising uses for Mobile Elevating Work Platforms?

Telehandlers and mobile cranes spend lots of time on movie sets. From lifting props and green screens to providing a platform for stunt dives and swings, telehandlers are big stars on set.

The green screen is an essential tool used on the set of many movies but lifting and moving a massive screen can be quite a task. Cherry pickers and Scissor Lifts are used to lift smaller screens in outdoor settings, but for bigger green screens, a telehandler takes the lead role.

During the filming of a pirate movie, a series of green screens were attached to telehandlers and extended out over the shoreline so that filmmakers could capture a battle scene, combining a real ship with CGI graphics in the background.

2. Rocking it at music festivals

MEWPs are a common sight at music festivals around the world. They are used to construct the massive stages and tents that form the focal point of the festivities.

The famous Coachella music festival in Palm Springs hosts 60 000 concert goers each year. But the grounds used for the concerts have no permanent infrastructure, so everything has to be built from scratch. Genie boom lifts are used at Coachella to erect the tents around the grounds and the massive stages.

MEWPS are also used to lift speakers and lighting rigs up over the concert area, to create a beautiful sound and light experience.

It’s not unusual for MEWPs to be used in rescue situations. When a fairground ride broke down on London’s South Bank, a cherry picker was called in to assist with the rescue.

A fire crew needed some heavy lifting help when 19 people, six of them children, were all left stranded in a fairground ride 20 meters off the ground.

A cherry picker was brought to the site and used to safely transport everyone to the ground.

Cherry pickers and aerial lifts are also often used to rescue stuck pets. No need to call a fire engine if kitty gets stuck in a tree. An aerial lift can get the pet down safely.

What happens if you move into a new apartment but find out your furniture won’t fit in the lift? You call in a telehandler. Many Mobile Elevating Work Platforms have been used to get furniture into and out of high apartment buildings. No need to pivot the couch in the stairwell.

5. Call the surgeon! The tree surgeon that is.

When felling and trimming incredibly tall trees, how do you safely and effectively cut off massive branches? The answer is to call in a MEWP to access parts of trees that are usually out of reach. Using the telehandler or cherry picker, tree surgeons can safely ascend to the top of a tree and cut the right branches safely.

If you have to trim the fronds on a massive palm tree, a cherry picker or telehandler is your best bet. Let’s be honest – climbing a ladder while carrying a vicious pair or pruning tools is not the safest idea.

An aerial lift is an ideal tool for large crowd control. Think soccer or other sporting events, music concerts, political rallies. Aerial lifts can be used to give security guards and police the best view of what’s happening below.

If you’ve ever wondered how they install massive Christmas trees at shopping centres and public events, wonder no more. MEWPs are used to put up large trees and install Christmas decorations on light poles. One of the world’s most famous Christmas trees is the giant tree they erect at New York’s Rockefeller Center. This tree is put up with the help of an extra-large aerial lift. 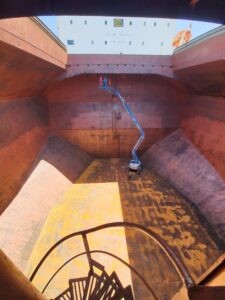 We are introducing a wide range of Spider Cranes from our partner Unic Cranes. [read more]

The modern fleet maintained by Goscor Access Rental, combined with its high availability and [read more]

Goscor Access Rental (GAR), part of the Goscor Group of Companies, has to date [read more]